Croci New Project Innovation offers a wide range of single-screw extruders (from 20 mm to 200 mm in diameter) for extrusion of plastic trimmings and the transformation of waste thermoplastic material from Cast Film and Bolla (Blown Film) plants for the production of plastic film for packaging, all the extruders equipped with special screws and are available in different configurations for in-line or co-extrusion use.

In addition to offering the widest range of extruders on the market, Croci New Project Innovatio presents 2 brand new systems:

This is a completely innovative and advantageous solution for both the producers of cast systems and transformers. An in-line regranulation system that feeds recycled material into the extruder in the form of a granulate with a density equal to that of virgin pellets, performing the re-granulation and granule transport to the extruder of the line simultaneously with the production of the film (and trimmings) . 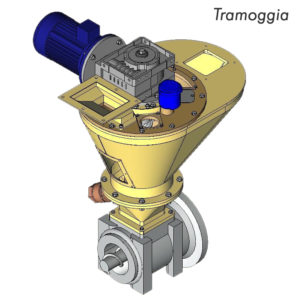 The originality, beyond the advantageous economic aspect on the production cycle, is in feeding the extruder with the trimmings from the line through a forced suction system through the extruder feeding cylinder: the trimmings are transported pneumatically to the Inlet of the extruder but to ensure that it does not accumulate at the inlet of the mouth, a suction system has been designed (and patented) in the area opposite the entrance to the material with holes in the feed cylinder.

The geometry of the screw is specially designed to push the trimming forward and compensate for the loss of the volume occupied, after softening, with a conical section of its profile. On leaving the extruder after the filtering net, the material passes through a small flat die that produces a slab of 150 mm, with a thickness of 2/3 mm. The plate is cooled with cold water passing through a series of controlled thermal calenders. Subsequently, a cutter breaks the slab, obtaining a granulate of shape and density similar to virgin pellets.

In addition to having eliminated the various critical issues compared to traditional procedures, there are other important advantages that this procedure ensures:

- Other regranulation procedures, designed to eliminate the classic mill grinder from the process, exert a mechanical action on the trimmings that "stress" the material, this is manifested by the tendency to create gels when it is put back online. Differently, in this case, the plate production temperatures are not excessively high, thus protecting the material from degradation phenomena of the resin.

- Normally, in order to regulate high quantities of material it is necessary to use water after cutting in the text on the die to cool the material. This creates the inconvenience of having to subsequently separate the granule from the water, in addition to all the problems related to the presence of tanks (filtering, bacterial charges, ect.). In this case the problem does not exist.

- ln order but not less important, this procedure results to be more convenient from the energetic point of view allowing a significant saving on production costs both for low and high speed plants.

The machine is the result of a specific research aimed at being able to directly reuse the film trimmings in LDPE and LLDPE, which are obtained from the Bolla (Blown Film) and Cast plants for the extrusion of plastic film, with flow rates that can vary from 7 to 40 Kg / h.

This system, which is easy to use, allows, in addition to the recycling of the material directly in line, to obtain savings in terms of storage spaces and labor for the same.

The trimmings coming from the plant and conveyed to the regulator's hopper are, through the extrusion screw with appropriately designed geometry, plasticised to obtain granules of the desired size by means of a die with a frontal cut.

The technology applied to the plastification apparatus allows to obtain a homogeneous product and to maintain the unaltered physical-chemical characteristics.

At the end of the process the obtained material can be transported with a special pneumatic system to be put back into the production cycle or in the storage silos. 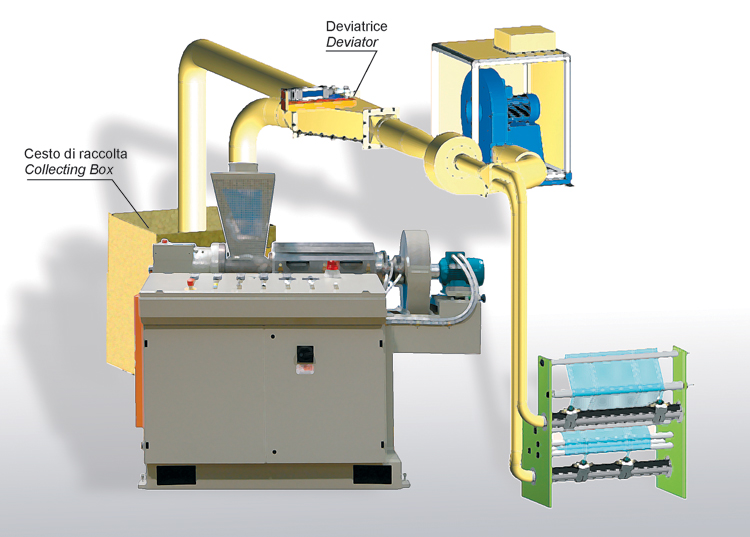